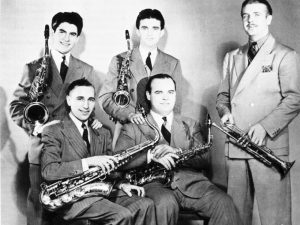 The Bunny Berigan orchestra came into existence on April Fools’ Day 1937 and over the next two years they participated in twenty-two recording sessions for Victor. For almost a year it represented the most stable band Bunny ever fronted. Favourable reviews of Bunny’s records appeared lavishly throughout newspaper columns as well as in the usual trade papers. On the 7 August he chose to record, for the third time, a Vernon Duke tune with lyrics by Ira Gershwin called “I Can’t Get Started”, a tune that was destined to become his greatest hit and his theme song. It was this extended four minute forty second version that he recorded with his full orchestra that took off.

Bunny Berigan and his Orchestra

Life Magazine, the most popular magazine in the country at the time, was planning a photo feature on the Goodman phenomenon for its regular feature ‘Life Goes To A Party’. On 16 October, shortly after the band took up their three month stay at the Pennsylvania Hotel, the magazine sent their photographer to the Madhatten Room where he successfully captured the atmosphere of a Saturday evening of dining and dancing. The magazine ran the story on 1 November and to make the most of this important national publicity, Benny christened a new Harry James composition “Life Goes To A Party” and the band recorded it a month later. At the same session Martha Tilton sang a lovely ballad written by violinist Stuff Smith.

Benny Goodman and his Orchestra 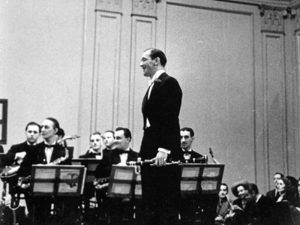 On the 16 January 1938 Benny Goodman and his orchestra made their historic appearance at Carnegie Hall. Swing music suddenly became respectable by being performed in front of a full house at New York’s most prestigious concert venue. Seven weeks after the concert  Benny and the orchestra recorded two Fletcher Henderson arrangements that had been prepared at the last minute to be included in the Carnegie Hall concert. Fletcher’s arrangement of “Blue Room” hit the airwaves on Benny’s “Camel Caravan” broadcast a few days before the concert and was subsequently included on the program. “Make Believe” on the other hand, for some reason, didn’t make it. Benny’s band was going through some personnel changes at the time of this March session. Gene Krupa had left to form a band of his own. For this recording session Benny had to borrow Lester Young, Freddy Green and Walter Page from Count Basie and Lionel Hampton filled in for Krupa on the drums.

Benny Goodman and his Orchestra

Listen : \"The Blue Room\" - Benny Goodman and his Orchestra 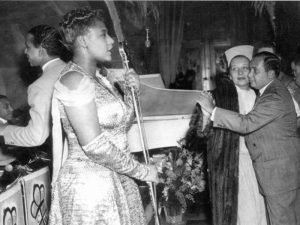 On 2 May 1938 Chick Webb and his orchestra produced one of the biggest, and perhaps unexpected, hits of the 1930s when Ella Fitzgerald recorded “A-Tisket A-Tasket,” essentially a nursery rhyme she had sang as a child growing up in Yonkers. It was Ella’s idea to hip-up the tune and whilst it perhaps wasn’t the record that many of her admirers had been expecting, it became the biggest selling record of 1938, staying at number one on the hit parade for ten weeks during June, July and August 1938. It eventually sold more than a million copies. The day after recording “A-Tisket A-Tasket” Chick Webb and the band went back into the studio and produced one of his famous instrumentals “Liza”. Benny Carter wrote the fine arrangement of a medium tempo tune featuring some of Chick Webb’s best work on record. The band responds in a relaxed way to the material while Chick gives the pulse a cracking reality.

Chick Webb and his Orchestra

Listen : \"Liza (Till The Clouds'll Roll Away)\" - Chick Webb and his Orchestra 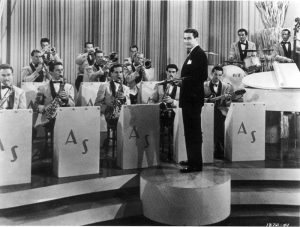 In his search for an identity Artie Shaw re-grouped in 1937 to form a new orchestra. After a series of one-nighters the new band went into the Victor studios for their first recording session in July 1938. Jerry Gray had come aboard as a full-time arranger. He and Artie had been discussing tunes to record when they hit upon an old Cole Porter tune written in 1935 for a none too popular stage show. “Begin The Beguine” became the first tune recorded by the new Artie Shaw band and it immediately lifted them to the heights of stardom. When Billie Holiday left the Count Basie band Artie immediately offered her a job. Due to contractual obligations she was only to record one tune with the band which she did on the same  July 1938 session. “Any Old Time” was a lovely tune written by and arranged for her by Artie himself. Billie sadly was only with the Shaw band for a short time – a black singer performing with a white band was always going to lead to racial problems, particularly in the South.

Listen : \"Any Old Time\" - Artie Shaw and his Orchestra 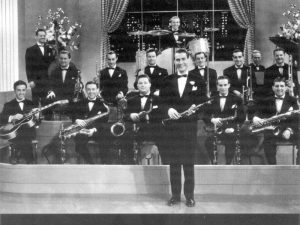 Artie Shaw’s version of “What Is This Thing Called Love” was the first recorded ensemble performance of this Cole Porter song as a jazz vehicle. There had only been only around ten jazz-orientated recordings made of the tune since it was first introduced in London in 1930, and then more than seven hundred were produced after Artie Shaw and Jerry Gray discovered it. Artie was looking for a replacement for Billie Holiday when he spotted Helen Forrest singing in a New York nightclub. She joined his band while Billie was still singing with the band. For a few weeks she shared the vocal spots with Billie, learning much from her. Helen’s first recorded vocal with the Artie Shaw orchestra was the Ralph Rainger and Leo Robin tune “I Have Eyes.” 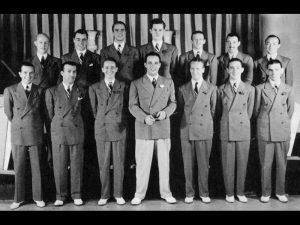 Most members of the Bob Crosby band had come from the disbanded Ben Pollack orchestra. They were a happy group of musicians and became very popular during the last half of the 1930s. They recorded this tune “Swingin’ At The Sugar Bowl” during a successful residency at Otto Roth’s Blackhawk Restaurant in Chicago. The genesis of the tune  was in a comic strip called Harold Teen, popular in the 1930s and 1940s. The author, Carl Ed used to come in all the time when the band was at the Blackhawk Restaurant and he regularly included members of the band in the strip. The Sugar Bowl was the soda shop where Teen and all his pals hung out. According to Bob Haggart, who put the tune together with other menbers of the orchestra, it was their way of saying ‘thank you’ to him.

Bob Crosby and his Orchestra 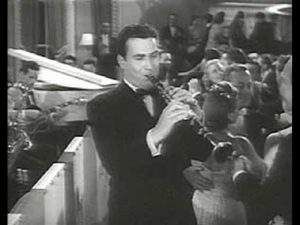 Buddy Rich joined the Artie Shaw band on Chrismas Day 1938. His drumming skills, particularly his unique way of playing his deep-cut Zildjian cymbals on his hi-hat stand, gave an enormous lift to the band. All the tunes recorded at this session early in 1939 and the next one, six days later, would be destined for Artie Shaw’s first album, a five-record collection of songs from Broadway and film musicals. “Lover Come Back To Me” came from the operetta New Moon and “My Heart Stood Still” from a 1927 London revue called One Damn Thing After Another. Both tunes were arranged by Jerry Gray. 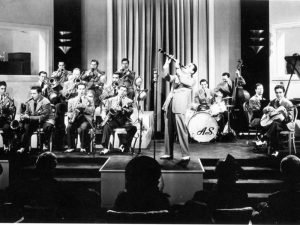 The Artie Shaw band moved into the Strand Theatre for two weeks while completing their album of show tunes. The most famous recording to come from this session was the Artie Shaw and Jerry Gray arrangement of “Carioca”, a Latin number introduced in the 1933 film “Flying Down To Rio,” starring Fred Astaire and Ginger Rogers. Their arrangement turns the tune into something of a swing classic with Buddy Rich sparking throughout. 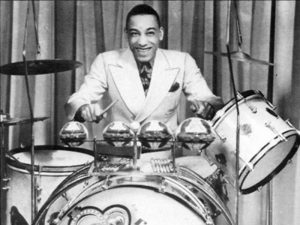 At the end of their residency at the Park Central Hotel, Chick Webb and his band set-off on another road trip, despite Chick’s health seriously deteriorating. He had contracted tuberculosis of the spine and was forced to take frequent rests backstage. In spite of his failing health his drumming was solid during this February session for Decca in New York. Ella sang four vocals at the session with Charlie Shavers’ “Undecided”, perhaps, being the best of them. Although Chick performed at one more great final concert at Boston’s Southland Cafe on 4 May 1939, the last instrumental he recorded with his band was his own tune “In The Groove At The Grove” in February 1939. Chick Webb passed away on 16 June 1939.

Chick Webb and his Orchestra 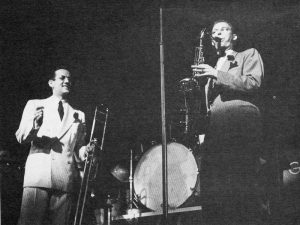 Glenn Miller began playing the trombone at the age of twelve and was already doing some arranging when he joined the Ben Pollack band in 1926. He was one of the many musicians freelancing in New York before being ready to start out with his own band in 1937. There was a double breakthrough for Glenn in March 1939 when, on his thirty-fourth birthday, the band was booked into the Meadowbrook Ballroom in Cedar Grove, New Jersey followed by an engagement to open the summer season at the prestigious Glen Island Casino in New Rochelle, just outside New York. Both venues were popular with college audiences and had their programs broadcast regularly. Following the engagement at Meadowbrook and within a month of closing at the Glen Island Casino, the Glenn Miller orchestra began to break attendance records wherever they appeared. Prior to his opening at the Casino, Glen had recorded a tune that he had written a few years earlier called “Now I Lay Me Down To Weep” which he wanted to use as his theme, but it was felt that the lyrics were a little too sad to be used. Glenn approached Mitchell Parish to come up with a new title and a new set of words. Thus “Moonlight Serenade” was created to become Glenn’s theme for the remainder of his career.

Glenn Miller and his Orchestra 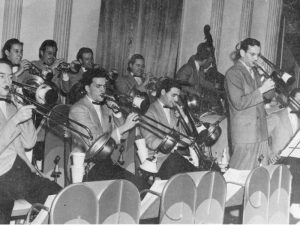 The Glenn Miller band’s biggest hit of all was recorded during that first successful summer engagement in 1939 at the Glen Island Casino. It was a tune that had came to him by chance, a tune written by musician-arranger Joe Garland, who had originally submitted it to Artie Shaw. Garland had written the tune to be played on the job it tended to run for about eight minutes. As this was far too long for a recording, in those days limited to around three minutes, Artie decided he couldn’t do very much with the piece. Garland took the tune to Miller who, with his arranging skills, made appropriate cuts, reducing it down to a tune that would fit on one side of a 78 rpm record. The tune was “In The Mood” and it was to top the charts for thirteen straight weeks in 1940.

Glenn Miller and his Orchestra 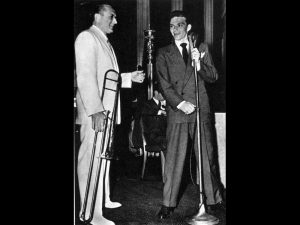 A very young Frank Sinatra was working at the Rustic Cabin in New Jersey when Harry James dropped in one evening and signed him up to sing with his newly formed band. They became great friends when performing together for nine months during  to such an extent that Harry agreed to let Frank out of his contract to join the more successful Tommy Dorsey orchestra. Over a three year period, starting from 1 February 1940, Frank Sinatra recorded eighty-three tracks with Tommy Dorsey with an incredible total of twenty-three of them reaching the top ten lists on the Billboard charts. The combination of Dorsey’s smooth trombone playing and the gentle stylings of Frank Sinatra’s vocals gave a new look and sound to the Tommy Dorsey orchestra as they moved into their most successful period since making their first recordings in 1935.

Tommy Dorsey and his Orchestra 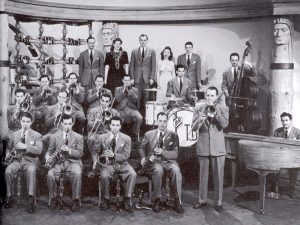 In 1940 Tommy Dorsey and his band moved to the West Coast to make their first Hollywood  feature film, Las Vegas Nights, which co-incided with a four week engagement at the newly opened Hollywood Palladium. When Sy Oliver left Jimmie Lunceford to join Tommy he did much to change the style and sound of the band. He had a unique way of injecting a soft feeling into popular tunes and standards such as he did on this recording of “Swanee River” and infused a new spirit into the band with his swinging arrangements, particularly when working on his own tunes, such as ”Swing High”.

Tommy Dorsey and his Orchestra